Yavin 4 Base is an attraction released with Star Wars Episode IV: A New Hope Event Update on 20th April 2021.

Yavin 4 Base, also known as The Great Temple, was a temple on the moon Yavin 4 that served as the headquarters of the Alliance to Restore the Republic early in the Galactic Civil War. In its struggle against the Galactic Empire, the Rebel Alliance had refitted the ancient-looking stone structure that notably contained a grand ceremonial chamber, a control room, and a vast hangar for starfighters. Following the Battle of Yavin, the Alliance evacuated the Great Temple and within three years, built and populated a new base of operations on the snow planet Hoth. 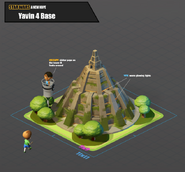