Welcome a Little One

The Child is a limited-time character released with The Mandalorian Event Update on 10th November 2020, and is a part of the Star Wars character collection.

Grogu, originally known as The Child and better known by the unofficial pseudonym Baby Yoda among fans and some media, is the deuteragonist of the Disney+ Star Wars series The Mandalorian. He is a Force-sensitive infant of the same species as Yoda who is sought after by the Bounty Hunters' Guild on behalf of the Imperial remnant.

Grogu, the Child's real name, was revealed on November 27th, 2020 in Season Two of the show The Mandalorian, which was released during the event of the same name in the game. 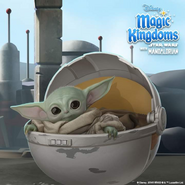 (Max level)
Add a photo to this gallery
Retrieved from "https://dmk.fandom.com/wiki/The_Child?oldid=238870"
Community content is available under CC-BY-SA unless otherwise noted.