The Bride is a very limited-time character released with Coco Event, The Bride Update on 15th October 2019, and the first Haunted Mansion character. She can only be found in the Villains Chests during the Halloween Period.

In the climax of the Attic scene, in all versions of Haunted Mansion, the guests are faced with the ominous figure of a ghost bride. The character has greatly varied over the years; the first incarnation was corpse-like, had a beating heart and held a candle and a bouquet. She was originally described as the Hatbox Ghost's love interest, and was possibly his murderer (or possibly the motivation of his murderer).

This Bride was removed and replaced by a version who, instead of having a corpse face, had no face at all, and instead only had glowing yellow eyes in a shadow-like face. This Bride became the classical model, but was replaced in the 1990's with a character that had a visible face and was clearly melancholy and tragic (whereas the previous two versions were ambiguous). After this one came a version with greenish skin and a wild, flowing hairstyle, and then yet another version who had once more glowing eyes, the face obscured by a thick wedding veil. Finally, in 2006, the "Beating Heart" element, as well as the possibly implied tragic backstory, were scrapped to make way for a completely new version of the Bride character, Constance Hatchaway.

Home's Where the Haunt Is (4h) 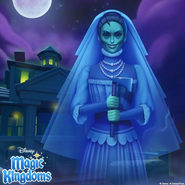 (Max level)
Add a photo to this gallery
Retrieved from "https://dmk.fandom.com/wiki/The_Bride?oldid=232025"
Community content is available under CC-BY-SA unless otherwise noted.