Flynn Level 3
I See the Light

Snuggly Duckling is an attraction released with Sleeping Beauty Update on 4th May 2016.

Snuggly Duckling is a pub located somewhere in the woods, not too far from Rapunzel's tower. Despite having what seems to be a "cute" name, the Snuggly Duckling is definitely not a cute place. The restaurant hosts many of Corona's ruffians and thieves who use the location as a hangout.

Featuring a sign down the road with the establishment's name, the Snuggly Duckling has a somewhat beat up appearance from the outside. Its sides are moss colored and its violet roof is stained with moss and leaves from the massive tree it sits next to. The building itself has an oddly angular appearance, as it curves and seems to lean forward on its frame, possibly as a result of the massive plant shifting the land. 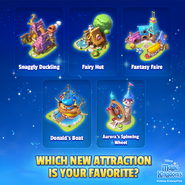