Rey is a limited-time character released with Star Wars Event Update on 17th December 2019, and is a part of the Star Wars character collection.

Rey Skywalker, formerly known simply as Rey, is a fictional character and the main protagonist of the sequel film trilogy of the Star Wars franchise created by George Lucas.

Rey is a scavenger who was left behind on the planet Jakku when she was a child, and later becomes involved with the Resistance's conflict with the First Order when her solitary life is interrupted by BB-8, the droid of ace Resistance pilot Poe Dameron, and a runaway stormtrooper named Finn. She is also the granddaughter of the galactic emperor and Dark Lord of the Sith Darth Sidious othervise known as Sheev Palpatine. 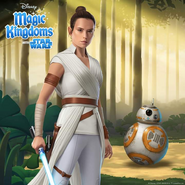 (Max level)
Add a photo to this gallery
Retrieved from "https://dmk.fandom.com/wiki/Rey?oldid=230043"
Community content is available under CC-BY-SA unless otherwise noted.