Remy's Ratatouille Adventure is an attraction released with Ratatouille Update on 26th January 2021.

The attraction was revealed as part of internet rumors of an expansion of Walt Disney Studios Park's Toon Studio area. Ratatouille: L'Aventure Totalement Toquée de Rémy is one of the biggest additions to Disneyland Paris; its show building is similar in height to that of the expansive Pirates of the Caribbean attraction at the neighbouring Disneyland Park, and cost an estimated $270 million to complete. 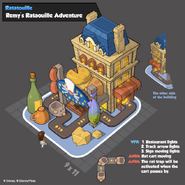