Percy is a premium character released with Pocahontas Update on 21st April 2020, and is a part of the Pocahontas character collection.

Percy is the former pug of Governor Ratcliffe and the (former) secondary antagonist from Disney's 1995 animated feature film, Pocahontas. He is shown to have a number of luxuries, including his own tub and a carousel with dog biscuits. Later on, he leaves Ratcliffe and becomes friends with Pocahontas, Meeko, and Flit with whom he had a formerly antagonistic relationship. 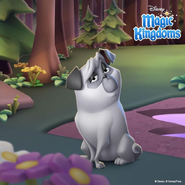 (Max Level)
Add a photo to this gallery
Retrieved from "https://dmk.fandom.com/wiki/Percy?oldid=231975"
Community content is available under CC-BY-SA unless otherwise noted.