Pegasus is a premium limited-time character released with Hercules Event Update on 2nd June 2020, and is a part of the Hercules character collection.

Pegasus is a major character in Disney's 1997 animated feature film Hercules. Pegasus acts as Hercules' personal steed. Pegasus was created by Zeus using clouds as a gift for his newborn son, Hercules. That night, however, Hercules was kidnapped by Pain and Panic... 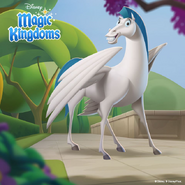 (Max Level)
Add a photo to this gallery
Retrieved from "https://dmk.fandom.com/wiki/Pegasus?oldid=234023"
Community content is available under CC-BY-SA unless otherwise noted.