Star Wars Episode V: The Empire Strikes Back Update has arrived!
Visit this page to learn all about what's coming up in Disney Magic Kingdoms!

View source
watch 02:56
Raise a Floppa - The Loop
Do you like this video?
Play Sound

Parade Tent is an attraction released with Initial Release on 17th March 2016.

Parade Tent is where you can launch parades composed of your favorite floats!

Get Floats and Start a parade!
Tap on the Tent next to the Cinderella Castle to begin a Parade. Buy different floats and add them to your Parade line-up. Once you are ready, let the Parade begin!

Improve your chances for better rewards by having more Parade Floats in your Parade! Play during the Parade for a 5% bonus on rewards from the Kingdom!

Parades last for 2 hours and are available after an 8h countdown triggered at the same time as the parade starts. The parade cooldown can be skipped with gems, but the Parade can not be skipped.

Other than looking cool, Parades are beneficial to your park, as they attract more Visitors and allow you to collect more Magic, Gems OR tokens!

A list of items that a float could drop, can be found underneath the float. If you click on the token icon, you can see what tokens a float can drop. And remember Parade rewards drop by chance! 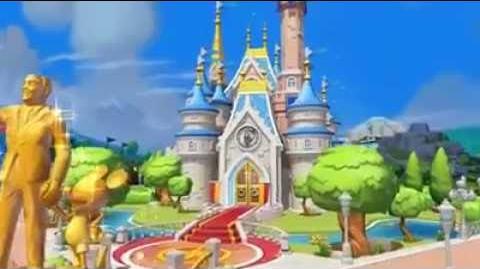