Meeko is a character released with Pocahontas Update on 21st April 2020, and is a part of the Pocahontas character collection.

Meeko is a supporting character in Disney's 1995 animated feature film Pocahontas. He is a raccoon and one of Pocahontas' animal friends. He is sly, very greedy and loves to steal from anybody. He is usually seen with either Flit or Percy. Flit finds him annoying, as does Percy. 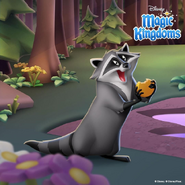 (Max Level)
Add a photo to this gallery
Retrieved from "https://dmk.fandom.com/wiki/Meeko?oldid=234982"
Community content is available under CC-BY-SA unless otherwise noted.