Maui is a limited-time character released with Moana Event Update on 16th April 2019, and is a part of the Moana character collection.

Maui is the deuteragonist of Disney's 2016 animated feature film Moana.

He is a boisterous demigod of South Pacific legend. With the power of his giant, magical fish hook, Maui serves as the audacious guardian of mankind. During one of his escapades, Maui awakened a terrible darkness that threatened to destroy the islands of Polynesia. This crisis forced Maui to join forces with Moana, a young hero chosen by the ocean, to save the world. 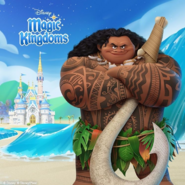 Maui has been unlocked!

(Max level)
Add a photo to this gallery
Retrieved from "https://dmk.fandom.com/wiki/Maui?oldid=229984"
Community content is available under CC-BY-SA unless otherwise noted.