Guinevere is an attraction released with Onward Event Update on 10th March 2020.

Guinevere is a van belonging to Barley Lightfoot. It is a used vehicle that Barley has worked on in order to get it driving again and even though it works it has some problems, such as the gas meter not working, the air-conditioning being overpowered, missing its turn signal, and the ignition having to be turned just so in order to start it up. 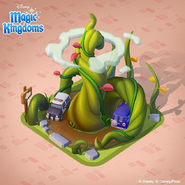