Where a Willow Grows

Grandmother Willow is an attraction released with Pocahontas Update on 21st April 2020.

Grandmother Willow is a sentient weeping willow tree that serves as an adviser to Pocahontas. She is depicted as being an ancient and wise figure. She can be comical at times, as in her words, there is still snap in her old vines. She serves mostly as a spiritual adviser and it is implied that she served a similar role to Pocahontas's now-deceased mother some years before. Being a willow tree, many other animals make their home in her branches. 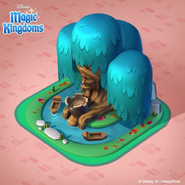