Forky is a premium character released with Toy Story 4 Update on 21st May 2019, and is a part of the Toy Story character collection.

Forky is a character from the Disney/Pixar film, Toy Story 4. He is a made-up toy created by Bonnie. Although he is one, he declares that he's not a toy. 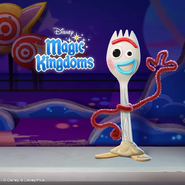 (Max level)
Add a photo to this gallery
Retrieved from "https://dmk.fandom.com/wiki/Forky?oldid=229916"
Community content is available under CC-BY-SA unless otherwise noted.