View source
watch 02:59
Wiki Targeted (Games)
Do you like this video?
Play Sound

First Order Stormtrooper is a limited-time character released with Star Wars Event Update on 17th December 2019, and is a part of the Star Wars character collection.

The First Order Stormtrooper identifies herself as KT-1138 upon being welcomed to the Kingdom. Furthermore, the Stormtrooper says she is called Kaity by her squad but notes it’s not an official name. She also comments that she hopes to get an assigned name, similar to Captain Phasma. 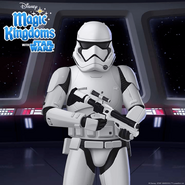