Fire Spirit is a limited-time character released with Frozen 2 Event Update on 19th November 2019, and is a part of the Frozen character collection.

Bruni the Fire Spirit is a character in Disney's 2019 animated feature film, Frozen II. Curious and cute, this salamander inhabits the Enchanted Forest. Though shy at first, Bruni can't help but be drawn to Elsa's icy magic and enjoys the cool snowflake treats she creates.

Although Bruni is his official name in Frozen 2, he was named Fire Spirit in-game. 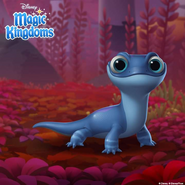 (Max level)
Add a photo to this gallery
Retrieved from "https://dmk.fandom.com/wiki/Fire_Spirit?oldid=231884"
Community content is available under CC-BY-SA unless otherwise noted.