Enchanted Tiki Room is a attraction released with Beauty and the Beast Event, Chip and Dale Update on 8th March 2017.

Enchanted Tiki Room is an attraction at Disneyland and Magic Kingdom (where it was originally titled Tropical Serenade). The experience invites guests to be serenaded by the Tiki Room Birds: José, Michael, Pierre, and Fritz, and listen to stories provided them by the Hawaiian gods of old. It was the first attraction to feature Audio-Animatronics.

The attraction also ran at Tokyo Disneyland from 1983 to 1999, but is now home to The Enchanted Tiki Room: Stitch Presents Aloha e Komo Mai!.

José, Michael, Pierre, and Fritz (the parrots) appear as non-playable characters within this attraction. 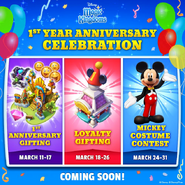 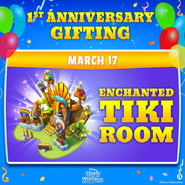 Promotion
Add a photo to this gallery
Retrieved from "https://dmk.fandom.com/wiki/Enchanted_Tiki_Room?oldid=233355"
Community content is available under CC-BY-SA unless otherwise noted.