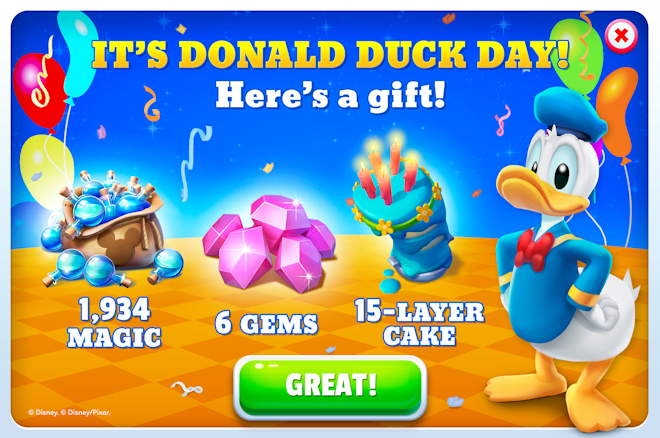 The 9th June is Donald Duck's Birthday. Donald's first appearance was in The Wise Little Hen (1934), but it was his second appearance in Orphan's Benefit which introduced him as a temperamental comic foil to Mickey Mouse.

In the 1930s, Donald typically appeared as part of a comic trio with Mickey and Goofy and was given his own film series in 1937 starting with Don Donald. These films introduced Donald's love interest Daisy Duck and often included his three nephews Huey, Dewey, and Louie. After the 1956 film Chips Ahoy, Donald appeared primarily in educational films before eventually returning to theatrical animation in Mickey's Christmas Carol (1983). His most recent appearance in a theatrical film was 1999's Fantasia 2000.

Donald has appeared in over 150 theatrical films, more films than any other Disney character, several of which were recognized at the Academy Awards, and is the most published comic book character in the world outside of the superhero genre.