Dad is a premium limited-time character released with Onward Event Update on 10th March 2020, and is a part of the Onward character collection.

Dad, whose name is Wilden Lightfoot, is the father of Ian and Barley Lightfoot and the husband of Laurel Lightfoot. Though he died before Ian was born and when Barley was a toddler, he left his sons a staff and a spell he wrote to bring him back for a day when Ian turns 16 years old so that he can see what they have become. 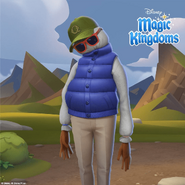 (Max Level)
Add a photo to this gallery
Retrieved from "https://dmk.fandom.com/wiki/Dad?oldid=236961"
Community content is available under CC-BY-SA unless otherwise noted.