Star Wars Episode V: The Empire Strikes Back Update has arrived!
Visit this page to learn all about what's coming up in Disney Magic Kingdoms! 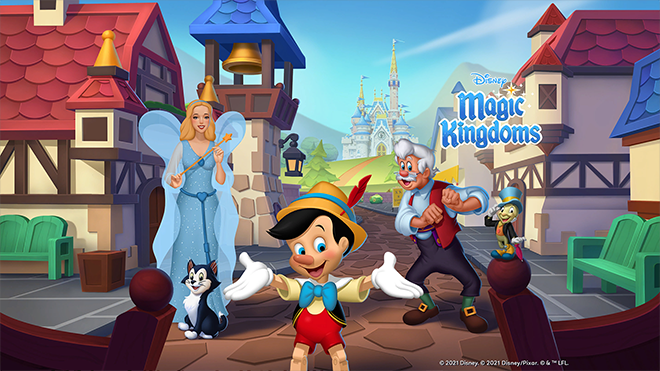 SOMEDAY, I'M GONNA BE A REAL BOY!
Pinocchio has arrived in the Kingdom! Welcome characters from this Disney classic to your park, along with unique attractions and concessions inspired by the film.

Download the update on December 14th*, 2021!
* Please note: Some platforms may receive the update at a later date, but don't worry – everyone will have access to unlock the new content at the same time.

PINOCCHIO MEGA EVENT – December 16th to January 12th
Get ready for a daring journey with this Pinocchio Event!

) have invaded! Tap to clear them and earn rewards before they're swept away.

) are hovering in the kingdom! Tap to clear them.

)! Tap them to win exclusive prizes!

) to send a character to free the birds.