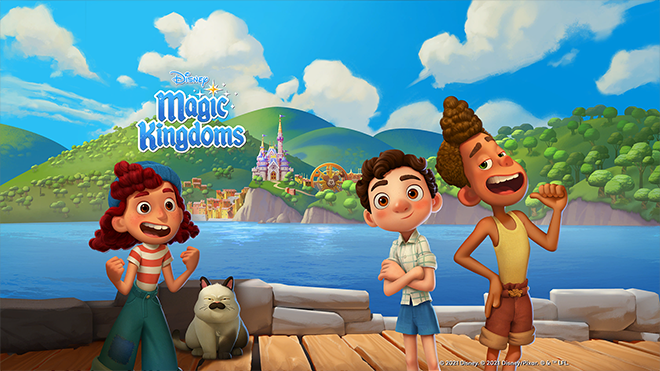 Luca Event UpdateTHE WORLD IS YOURS!

THE WORLD IS YOURS!
It’s early November in Portorosso, and Luca and Giulia have returned home for the first holiday of the school year. Together with Alberto, they’re preparing to transform Giulia’s fish-delivery bike into a top-of-the-line racing machine!

We were just here for the pasta... but now this is turning into maximum excitement!

* Please note: Some platforms may receive the update at a later date, but don't worry – everyone will have access to unlock the new content at the same time.

) that appear throughout the event to earn Luca Tokens (

ISLAND CRABS TAPPER EVENT – July 18th to July 20th We knew the beach would be busy this time of year… but not THIS busy! Prepare to send some Island Crabs (

) back into the Mediterranean Sea by tapping them. This is a leaderboard event.

)! Encourage them to fly elsewhere for their lunch by tapping them. This is a leaderboard event.

WRECK-IT RALPH TOWER CHALLENGE - TAKE TWO – August 5th to August 19th
Great news, everyone! We have decided to bring back a past Tower Challenge! If you’ve been itching to acquire Wreck-It Ralph Characters & Attractions, now’s your second chance to do just that!

HIDDEN CROWS TAPPER EVENT – August 5th to August 19th
As you attempt to foil Maleficent’s plan during the reprise of a past Tower Challenge, you’ll also be able to chase away some Hidden Crows (

)! Tap them to earn Refresh Token (

)! It is easier than ever before to view your beloved characters.