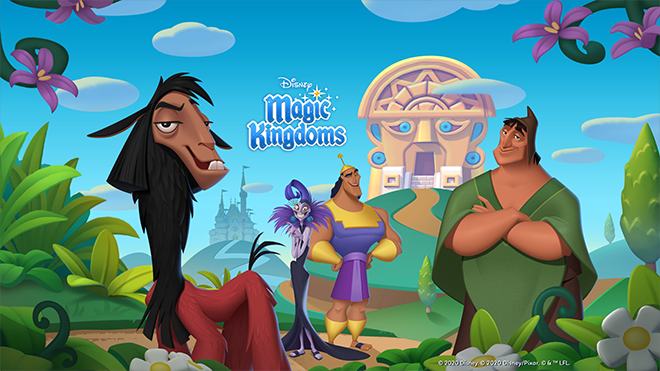 The Emperor's New Groove UpdateGET YOUR GROOVE ON

GET YOUR GROOVE ON
Boom, baby! It’s all about Kuzco. Join characters from The Emperor's New Groove in a new, drama llama-filled addition to the main Kingdom Quest storyline!

Help Kuzco and Pacha out of another hairy predicament, while Kronk and Yzma try to finish the job - just don't forget the spinach puffs!

LEND A HAND WITH GORD
Maleficent is back! Help Gord lend a hand in our latest Tower Challenge, starting on August 27th. Defeat Maleficent and clear the curse to earn new bonus content during the Event!

* Please note: Some platforms may receive the update at a later date, but don't worry – everyone will have access to unlock the new content at the same time. Please stay tuned to the official Disney Magic Kingdoms Facebook page for more information!

Wreck-It Ralph Tower Challenge
Brace yourself for a surprising addition to the Wreck-It-Ralph family, in an unexpected back-to-back Tower Challenge extravaganza!

Gord is arriving to lend a hand in the Kingdom after a looong time coming. Either way, we're sure you'll be shouting with joy! Successfully defeat Maleficent, and Kingdomers will also get a chance to unlock bonus content that you can put those extra Maleficent Coins towards. Good luck!

The Tower Challenge starts on August 27th, 2020! Are you up to the challenge?

The following Decorations have been removed from the Decoration Chest:

The following Decorations have been added to the Decoration Chest:

The following changes have been made to Wreck-It Ralph Legendary Chests:

The following Attraction have been added to the Merlin's Shop: