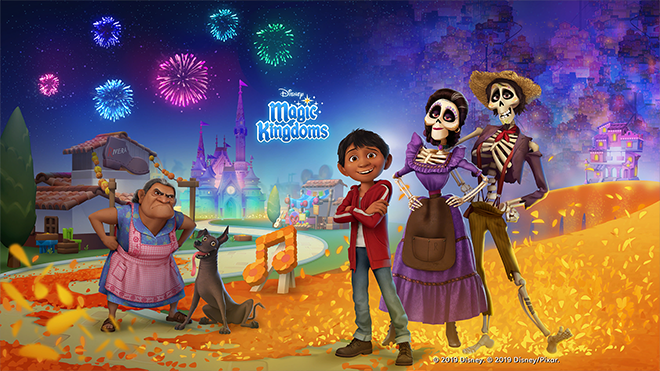 An update to remember! The Rivera family arrives bringing cheer, music and happiness to the Kingdom! Get ready to put on a show, and welcome characters from Disney and Pixar's Coco – including Miguel, Héctor, Mamá Coco and Dante.

Never underestimate the power of music! Ernesto de la Cruz wants to get in the way of Héctor's musical celebrations. Join the time-limited event and find a way to make sure the show goes on!

Chest Vault
The Chest Vault will be permanently removed from Disney Magic Kingdoms. And as promised, we will be reimbursing players for any Gems or Magic spent unlocking additional Pedestals and Storage Slots! Stay tuned for more information.
NOTE: Any unopened chest left within the Vault will be automatically opened upon first launch after downloading the update.

Daily Free Chest Screen
The Chest Vault will be replaced with a new Daily Free Chest Screen. Every day, players will be able to collect one free Bronze Chest by visiting this screen. In addition, players will also have the opportunity to earn an extra chest by watching an in-game ad. Chests earned by watching ads will only be available by visiting the Daily Free Chest Screen and will no longer be offered after collecting a "hidden" Bronze Chest within the Kingdom. This means that you won't need wait for a Bronze Chest to appear in your Kingdom to access this free Chest!
NOTE: This change will not affect the number of "hidden" Chests you'll be able to collect daily within your Kingdom.

Enchantments are now availavle for the following Attractions