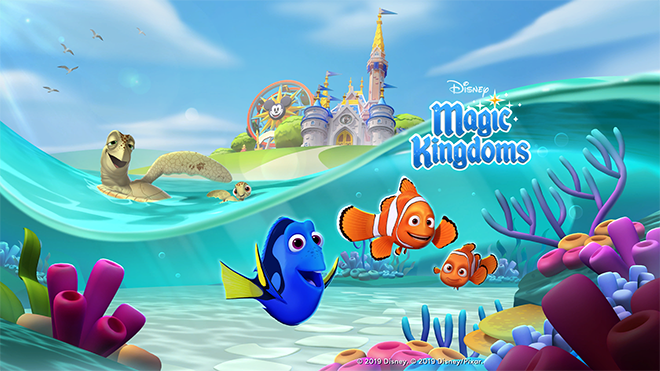 Join Nemo and his friends as they embark on aquatic adventures to rescue Marlin in a time-limited event that's sure to be FIN-tastic! Put on your swimsuits, dive in, and welcome Nemo, Marlin, Dory, Crush and other adorable characters from Disney and Pixar's Finding Nemo. The event starts on August 8th, 2019!

We're also thrilled to announce the introduction of Kingdom Thrill Levels to Disney Magic Kingdoms. Get ready to earn even more rewards with this thrilling, new feature.

Finally, in celebration of its 50th anniversary, we are releasing an all-new Attraction based on Disneyland's Haunted Mansion. This Attraction will be available after the Finding Nemo Event! Fun fact: Did you know that The Haunted Mansion currently found in Disney Magic Kingdoms is based on the Disney World Attraction?

Kingdom Thrill Level!
This new feature will allow you to earn more rewards by meeting requirements for each Zone identified by its Landmark Attraction – e.g. California Screamin', Space Mountain, "it's a small world", etc. Thrill Levels range from 1 to 3 Stars. The more Thrill Zone Requests you fulfill, the higher the Thrill Level will be for that Zone.

We will first make this feature available to the California Screamin' Zone and expand it to other Zones in future updates.

To unlock this feature, you will first need to defeat Zurg by playing through the Kingdom Quest Storyline.

A full example of Thrill Requirements and Rewards for the California Screamin' Zone have been provided below.

Magic Pedestal
Pedestals supporting blue orbs were added to the Landmark Attractions in our last update. These mysterious devices are "Magic Pedestals". They serve as a source of Magic which you will earn based on each Zone's current Thrill Level – i.e. the higher your Thrill Level, the higher the Magic Pedestal Level will be, and the more magic you'll produce!

As we expand this future to other Zones, your Kingdom will generate even more Special Requests Wishes!