The Rescuers is a character collection consisting of characters from Disney's 1977 animated feature film The Rescuers. 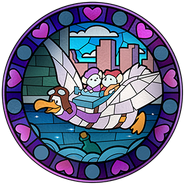