Star Wars is a character collection consisting of characters from the Star Wars franchise. 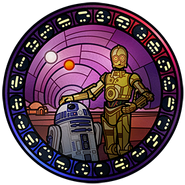