Cara Dune is a limited-time character released with The Mandalorian Event Update on 10th November 2020, and is a part of the Star Wars character collection.

Caraysnthia "Cara" Dune was a human female Alderaanian who served as a shock trooper in the Alliance to Restore the Republic and the New Republic during the Galactic Civil War. A seasoned warrior, she was an intimidating brawler and a crack shot. By 9 ABY, Dune had put her days of military discipline behind her to operate as a mercenary. After spending time on the planet Sorgan, she met the bounty hunter Din Djarin and his companion and worked with him for a short time before Djarin departed Sorgan.

All Are Welcome (6h) 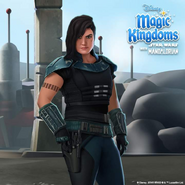 (Max level)
Add a photo to this gallery
Retrieved from "https://dmk.fandom.com/wiki/Cara_Dune?oldid=236067"
Community content is available under CC-BY-SA unless otherwise noted.