Finn Level 2
Care for a Drink?

Cantina is an attraction released with Star Wars Event Update on 17th December 2019.

Cantina is a bar located in the city of Mos Eisley on the planet Tatooine; first introduced in the original Star Wars film, Episode IV: A New Hope. The bar hosts some of the roughest and meanest patrons of the Outer Rim servicing various species of all sorts within and with a tendency for fights to break out, whether it be by blaster or even lightsaber. However, the bar is also a good place to find assistance that are willing to get their hands dirty, from outlaws to bounty hunters. Only Droids are not permitted to enter; however by the era of The Mandalorian, this has changed and they have even accepted a droid bartender working at the facility. 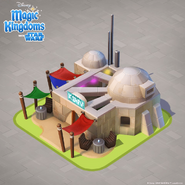 Enchantment Level 5
Add a photo to this gallery
Retrieved from "https://dmk.fandom.com/wiki/Cantina?oldid=230186"
Community content is available under CC-BY-SA unless otherwise noted.