Blazey is a premium limited-time character released with Onward Event Update on 10th March 2020, and is a part of the Onward character collection.

Blazey is a minor character from the 2020 Disney/Pixar film "Onward". She is a pet dragon that Ian and Barley own. Despite being a dragon, the decrease in magic in the world has led to Blazey acting more like a dog than a dragon. 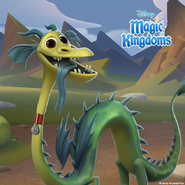 (Max Level)
Add a photo to this gallery
Retrieved from "https://dmk.fandom.com/wiki/Blazey?oldid=229852"
Community content is available under CC-BY-SA unless otherwise noted.