View source
watch 02:59
Metroid Dread - The Loop
Do you like this video?
Play Sound

BB-8 is a limited-time character released with Star Wars Event Update on 17th December 2019, and is a part of the Star Wars character collection.

BB-8 is a droid character in the Star Wars franchise, first appearing in the 2015 Star Wars: The Force Awakens. It later appeared in 2017's Star Wars: The Last Jedi, and 2019's Star Wars: The Rise of Skywalker. Spherical with a free-moving domed head, BB-8 is portrayed by both a rod puppet and a remote-controlled robotic unit. 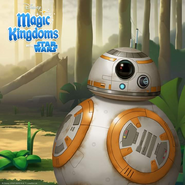